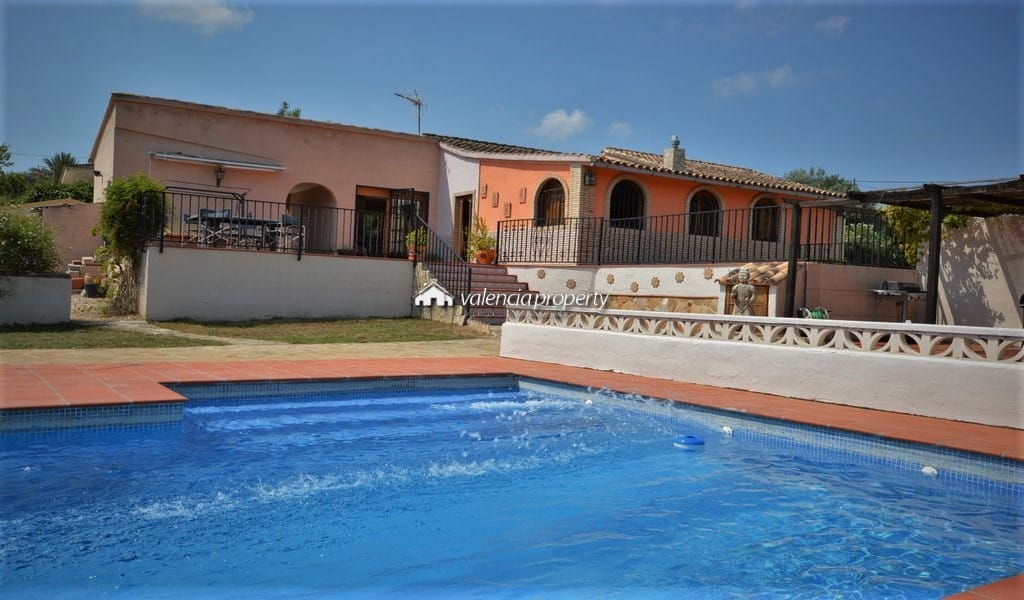 Detached villa located in the best residential area of Xàtiva. Located in the geographic center of the Bixquert valley, with views facing the south face of the city’s Castle. Enjoy a high degree of privacy, near an urbanization, just 10 minutes from all urban amenities available which include medical facilities, hospital, banks, shops, supermarkets, sports facilities, schools and local services. It is 54 km from the capital Valencia, and 45 minutes from all the most important beaches on the Valencia Coast. A city well connected by train and road with all the rest of the Spanish geography. With two nearby airports: Alicante and Manises in Valencia at 110 and 75km respectively.

A 2880 m² plot, which is reached by a completely asphalt road. Its entire perimeter, in addition to being fenced, is planted around cypresses, oleanders and other kinds of shrubs that give it a complete sense of privacy. The interior is easily accessed through a large entrance gate. Once inside, in front of the west facade of the house there is a large gravel-covered esplanade where you can park or turn around the cars. Also there is a carport with room for a further two cars.

The garden has two different areas: the one in front of the house, next to the west facade and which contains trees that provide shade: some conifers and some false pepper, and the garden area to the east of the plot, which surrounds the swimming pool with aromatic plants (jasmine) and fruit trees: a lemon tree and the occasional orange tree.

A good size swimming pool (10×5 m with filter) within a beautiful area surrounded by grass with a terrace to the east that has a shaded wooden pergola and a covered barbecue on the opposite side. At the back of the house there is a wooden house that serves as a warehouse, and next to it, in a different environment, a space for relaxation and rest with shade.

A one storey home, built in 1990, but renovated (*) and later expanded. Within its 198 m² area, the distribution is as follows: hall, three double bedrooms, the main one being equipped with an en-suite bathroom inside. A second and spacious bathroom (9 m²), at the end of the hall, of a family nature. Two rooms: a large one (21 m² living room with fireplace and air conditioning), the living room with views (bright and cozy, and the fully equipped, spacious and functional kitchen (12 m²) that has an exit to an outside terrace, through sliding doors The terrace occupies an elevated position above the pool, with views of the landscape in the background, where you can see the illuminated castle at dusk.

* Two of the improvements were: 1) equip and integrate within the same building a large living room (18 m²) with views towards the spectacular castle. The installation of wooden frames and shutters on the windows together with the inclusion of a fireplace in one corner of the room created a unique atmosphere. 2) A utility room was also installed to be used as an auxiliary space of the main house, such as a laundry or warehouse, and a toilet that was close to the pool, which would be practical, at the same time, avoiding having to enter the house.

At this point, we want to emphasize some important aspects: the property mains drinkable water and electricity. It is a property built on classified urban land, perfectly legalized and with all the documentation up to date so that you can enter to live, almost immediately. Internet is available. Sewage is a cesspool. Low cost in taxes and with low maintenance costs.

The property, from our point of view, obtains an unbeatable rating and we share with its owners their special attachment to it, because we understand their effort in achieving an immaculate presentation. It is possible that there are more expensive houses but not better for that, and this denotes something very simple to understand: sometimes less is more!

Village house, 3 bedrooms, patio and terrace. Located in Novetlè, near to Xàtiva

Town house, located in Quesa, in the region of “La…

In lands of the historic Order of the Knights of Montesa.

Living next to a castle of the Middle Ages, next…